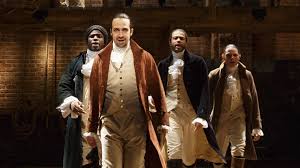 When you first hear the name Hamilton you might think of the play on Broadway. The play is about Alexander Hamilton, a part of the American Revolution. He was a founding father and the first Secretary of the U. S. Treasury. Not only was he a founding father, but he was also a banker, a lawyer, and fought in the war. He was born in January 1755 and died in July of 1804. There was a play made after him by actor and writer, Lin-Manuel Miranda.

The award-winning singer, songwriter, actor, and screenwriter Lin Manuel Miranda’s play, Hamilton debuted in 2015 and quickly became the most sought after ticket on Broadway.

Hamilton tells the story of one of the U.S. founding fathers, Alexander Hamilton in an entertaining way. The critically acclaimed play is sung & rapped by performers such as Johnathan Groff, Daveed Digs, Leslie Odem Jr. & Lin Manuel Miranda himself. Miranda wrote the script and composed the songs for this Broadway phenomenon.

Therefore, in honor of this award-winning soundtrack, here are our top 10 tracks from the Hamilton soundtrack.